Fear of the Huddled Masses

At first, I felt a sense of security upon hearing that more than half of our nation’s governors have said that Syrian refugees would not be welcome in their states. 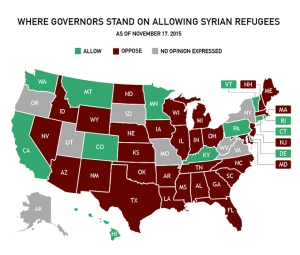 The day after the terrorist attacks took place in Paris, I wrote about the courage shown by many Parisians. I wondered if I could be brave enough to invite strangers into my home within hours of the attacks.

Today, I read that France will take in 30,000 refugees over the next two years.

There have been times in our past when fear put us on a slippery slope–a slope that, step by slippery step, we slid down, until we moved far, far away from some of the things I value most–diversity, generosity, courage.

History repeats itself. Before World War II, fewer than 5% of Americans thought “we should encourage [Jewish political refugees] to come to America.

And though this situation bears differences from the Japanese American internment–for one, during World War II, more than 60% of the internees were actually citizens of this country, whereas the Syrian refugees are not–the fact that we once again, are making judgments against an entire group of people based on the actions of a relative few, is the same today as it was in 1942.

The vast majority of these refugees are already victims of terrorism. They’ve lost their homes, their possessions, loved ones, some, even their lives. True, there are some logistical challenges to accepting them into our country, but most of the protests I’ve seen have nothing to do with logistics. They have to do with fear.

I agree with The Washington Post’s description of where the refugees now find themselves:

Syrian refugees in the United States have become a political football after the Paris attacks.

In my opinion, the governors of the states denying the refugees are taking advantage of our fears for political gain, making statements like the one made by Texas Governor Greg Abbott in a letter to President Obama:

“We will refrain from participating “in any program that will result in Syrian refugees — any one of whom could be connected to terrorism — being resettled in Texas.”

Why do I think statements such as Governor Abbott’s are made primarily for political gain? Mostly because they don’t appear to be very well thought-out. Denying the Syrians refuge in their states leaves me with the following questions:

In a CNN article, Delaware Governor Jack Markell made several excellent points, which you can read here. But the comment that struct me most was his reminder of the quote that appears on the pedestal of the Statue of Liberty:

Give me your tired, your poor,
Your huddled masses yearning to breathe free…

This prompted me to read the entire poem by Emma Lazarus:

Not like the brazen giant of Greek fame,
With conquering limbs astride from land to land;
Here at our sea-washed, sunset gates shall stand
A mighty woman with a torch, whose flame
Is the imprisoned lightning, and her name
Mother of Exiles. From her beacon-hand
Glows world-wide welcome; her mild eyes command
The air-bridged harbor that twin cities frame.

“Keep, ancient lands, your storied pomp!” cries she
With silent lips. “Give me your tired, your poor,
Your huddled masses yearning to breathe free,
The wretched refuse of your teeming shore.
Send these, the homeless, tempest-tost to me,
I lift my lamp beside the golden door!”

I can’t put my reaction to this poem any better than Steve did after I read it to him: “What has happened to our humanity?”

I have no doubt I’m as frightened as the next person. But I’m going to do my best to resist for as long as I can, sliding down fear’s slippery slope.

12 Responses to Fear of the Huddled Masses